The WP Cloud Server plugin has always been available with two built-in modules. DigitalOcean for creating and managing cloud servers and ServerPilot for server management. The two modules worked together to deploy ServerPilot servers automatically. With the last update in 2020 you could use WooCommerce as well as EDD to sell hosting plans!

We thought it was a good starting point with add-on modules providing additional services and even cloud providers. But over the last few months users have repeatedly asked for additional functionality in the FREE version. We also realised that users who didn’t want to use DigitalOcean or ServerPilot would never even consider the plugin!

So. The result was a rethink! Today sees the release of the first release in 2021, and it is a major release which jumps to version 3.0.0 of the WP Cloud Server plugin. We decided that jumping to a major release version was justified!

The FREE plugin, available from WordPress, now has support for the following cloud providers built-in;

We have also expanded the server management options to include;

That’s not all! We’ve added a new section to the plugin called ‘Managed Hosting’ which adds support for;

This means that you can connect your Cloudways account to the plugin and then deploy new servers or applications manually, or sell hosting plans that automatically create servers and applications!

If you have been using the plugin before this release then you will find some big changes to the menu structure! We’re sorry about this but we believe that it is worth the pain and disruption now in order to have a sound base on which to build! We think we are about there now! Let us know what you think.

The last question before we look at the main updates is where does this leave the add-on modules? Once again we feel that we have a much better solution for people who want the add-on services! The FREE plugin will provide the basic functions for each cloud provider, enough to deploy servers, sell hosting plans, and to view a list of those servers deployed. But if you want more advanced features such as monitoring, alerts, and advanced features then you will need an add-on!

We haven’t finished yet with adding services! The next couple of releases should see Amazon Lightsail and Ploi added to the plugin. Both are working and are in testing, so shouldn’t be too long before they appear in the plugin! 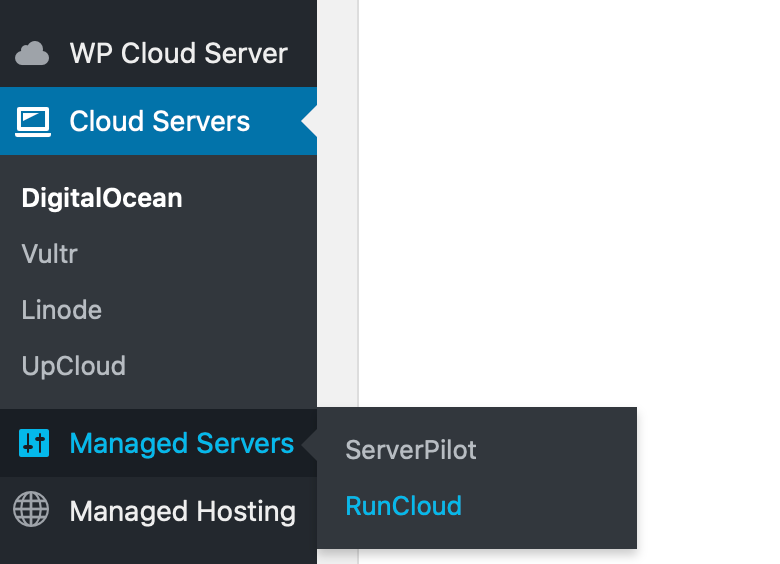 The screenshot above shows the new WordPress Admin Menu for the plugin. As you can see there are four main options. The first at the top called ‘WP Cloud Server’ is where you can access settings and module information. You can activate and deactivate modules, view debug data, etc.

Next is the ‘Cloud Servers’ menu where you can access the pages by cloud provider, allowing you to deploy, view, and manage your servers. If you have WooCommerce or EDD installed you can sell server hosting!

The ‘Managed Servers’ menu, as you can see, gives access to ServerPilot or RunCloud, and eventually Ploi.

The last option is ‘Managed Hosting’ which gives access to the Cloudways control panel.

Get the Latest News, Tutorials, and Special Offers!

We promise to never spam you!